Mosquitos get the swat with new forecasting technology

Mosquitos get the swat with new forecasting technology

Mosquitoes aren’t just the peskiest creatures on Earth; they infect more than 700 million people a year with dangerous diseases like Zika, Malaria, Dengue Fever, and Yellow Fever. Prevention is the best protection, and stopping mosquito bites before they happen is a critical step.

SC Johnson — a leading developer and manufacturer of pest control products, consumer packaged goods, and other professional products — has an outsized impact in reducing the transmission of mosquito-borne diseases. That’s why Google Cloud was honored to team up with one of the company’s leading pest control brands, OFF!®, to develop a new publicly available, predictive model of when and where mosquito populations are emerging nationwide.

As the planet warms and weather changes, OFF! noticed month-to-month and year-to-year fluctuations in consumer habits at a regional level, due to changes in mosquito populations. Because of these rapid changes, it’s difficult for people to know when to protect themselves. The OFF!Cast Mosquito Forecast™, built on Google Cloud and available today, will predict mosquito outbreaks across the United States, helping communities protect themselves from both the nuisance of mosquitoes and the dangers of mosquito-borne diseases — with the goal of expanding to other markets, like Brazil and Mexico, in the near future.

With the OFF!Cast Mosquito Forecast™, anyone can get their local mosquito prediction as easily as a daily weather update. Powered by Google Cloud’s geospatial and data analytics technologies, OFF!Cast Mosquito Forecast is the world’s first public technology platform that predicts and shares mosquito abundance information. By applying data that is informed by the science of mosquito biology, OFF!Cast accurately predicts mosquito behavior and mosquito populations in specific geographical locations.

Starting today, anyone can easily explore OFF!Cast on a desktop or mobile device and get their local seven-day mosquito forecast for any zip code in the continental United States. People can also sign up to receive a weekly forecast. To make this forecasting tool as helpful as possible, OFF! modeled its user interface after popular weather apps, a familiar frame of reference for consumers.

The technology behind the OFF!Cast Mosquito Forecast

To create this first-of-its-kind forecast, OFF! stood up a secure and production-scale Google Cloud Platform environment and tapped into Google Earth Engine, our cloud-based geospatial analysis platform that combines satellite imagery and geospatial data with powerful computing to help people and organizations understand how the planet is changing.

The OFF!Cast Mosquito Forecast is the result of multiple data sources coming together to provide consumers with an accurate view of mosquito activity. First, Google Earth Engine extracts billions of individual weather data points. Then, a scientific algorithm co-developed by the SC Johnson Center for Insect Science and Family Health and Climate Engine experts translates that weather data into relevant mosquito information. Finally, the collected information is put into the model and distilled into a color-coded, seven-day forecast of mosquito populations. The model is applied to the lifecycle of a mosquito, starting from when it lays eggs to when it could bite a human.

It takes an ecosystem to battle mosquitos

Over the past decade, academics, scientists and NGOs have used Google Earth Engine and its earth observation data to make meaningful progress on climate research, natural resource protection, carbon emissions reduction and other sustainability goals. It has made it possible for organizations to monitor global forest loss in near real-time and has helped more than 160 countries map and protect freshwater ecosystems. Google Earth Engine is now available in preview with Google Cloud for commercial use.

Our partner, Climate Engine, was a key player in helping make the OFF!Cast Mosquito Forecast a reality. Climate Engine is a scientist-led company that works with Google Cloud and our customers to accelerate and scale the use of Google Earth Engine, in addition to those of Google Cloud Storage and BigQuery, among other tools. With Climate Engine, OFF! integrated insect data from VectorBase, an organization that collects and counts mosquitoes and is funded by the U.S. National Institute of Allergy and Infectious Diseases.

A better understanding of entomology, especially things like degree days and how they affect mosquito populations, and helping communities take action is critically important to improving public health.

A version of this blogpost appeared on the Google Cloud blog. 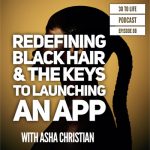 Next Article 88: Redefining Black Hair & The Keys To Launching An App with Asha Christian

An accelerator for early-stage Latino founders

After 10 years of working with early-stage founders at Google for Startups, I’ve seen time and time again how access activates potential. Access to capital is the fuel that makes startups go, access to community keeps them running, and access to mentorship helps them navigate the road to success.But access to the resources needed to grow one’s business are still not evenly distributed. Despite being the fastest-growing group of entrepreneurs in the U.S., only 3% of Latino-owned companies ever reach $1 million in revenue. As part of our commitment to support the Latino founder community, today we’re announcing a new partnership with Visible Hands, a Boston-based venture capital firm dedicated to investing in the potential of underrepresented founders.During last year’s Google for Startups Founders Academy, I met Luis Suarez, a founder and fellow Chicagoan whose startup, Sanarai, addresses the massive gap in Spanish- speaking mental health providers in the U.S. Sanarai connects Latinos to therapists in Latin American countries for virtual sessions in their native language. When I asked Luis about the most helpful programs he had participated in, he highly recommended Visible Hands. The program gave Luis the opportunity to work alongside a community of diverse founders to grow his startup and have also helped him craft his early fundraising strategy. Visible Hands also supplies stipends to their participants, helping founders who might otherwise not be able to take the leap into full-time entrepreneurship.Inspired by feedback from founders like Luis, Google for Startups is partnering with Visible Hands to run a 20-week fellowship program, VHLX, to better support the next wave of early-stage Latino founders across the U.S. and to create greater economic opportunity for the Latino community. In addition to hands-on support from Google and industry experts, we are providing $10,000 in cash for every VHLX participant to help kickstart their ideas. Following the program, founders will have the opportunity to receive additionaladditional investment from Visible Hands, up to $150,000.Our work with Visible Hands and our recent partnership with eMerge Americas is part of a$7 million commitment to increase representation and support of the Latino startup community. I’m also looking forward to the Google for Startups Latino Leaders Summit in Miami this June, where in partnership with Inicio Ventures we’re bringing together around 30 top community leaders and investors from across the country to discuss how we can collectively support Latino founders in ways that will truly make a difference. And soon, we’ll share the recipients Google for Startups Latino Founders Fund.If you or someone you know would be a great fit for VHLX, encourage them to apply by June 24.

PlanetScale, the database-as-a-service company targeting the largest data collections, announced a new collection of features to improve performance for many more complex forms of analysis while simplifying life for developers who must provide it

WEKA, the Data Platform for AI company, unveiled the fourth  generation of its software-based solution that delivers first to market results with artificial intelligence (AI),  machine learning (ML) and other next generation workloads via a single, scalable, highly performant platform for hybrid cloud and edge environments – now available in any public clouds of their choosing.